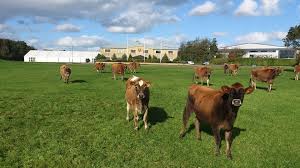 The President, HRH The Princess Royal, joined the Trustees and members at this year’s RASC AGM held at the Jersey Showground, home of the Royal Jersey Agricultural & Horticultural Society.
Opening the meeting, our Chairman, Lord Vestey, welcomed all members and guests and thanked the RJA & HS for their hospitality. He added that members had particularly enjoyed their visit to the Summer Show and the impressive display of Jersey cattle.

New Trustees
Edwin White (Royal Bath and West of England Society) was thanked for his service as a retiring Trustee. Chris Riddle (Royal Cornwall Agricultural Association) was re-elected as Trustee and Robert Drewett (RB&WS) and Geoff Burgess (Royal Smithfield) were elected and welcomed as new Trustees.
Next Generation convenors Anna Playfair-Hannay and Will Prichard (Pembrokeshire) were thanked for their service and Breyton Milford (Cape of Good Hope Agricultural Society (Agri-Expo)) and Rebecca Dawes (Royal Highland) elected as their successors. Will Prichard continues his service as a co-optee to the board.

More news
Following the AGM members heard how the RJAHS and the charity Send-A-Cow were working together in Rwanda to build industries and changing lives through improved cattle breeding. NG convenors Aled Jones and Will Hyde updated the meeting on this year’s Understanding and Assistance Mission to the Caribbean.